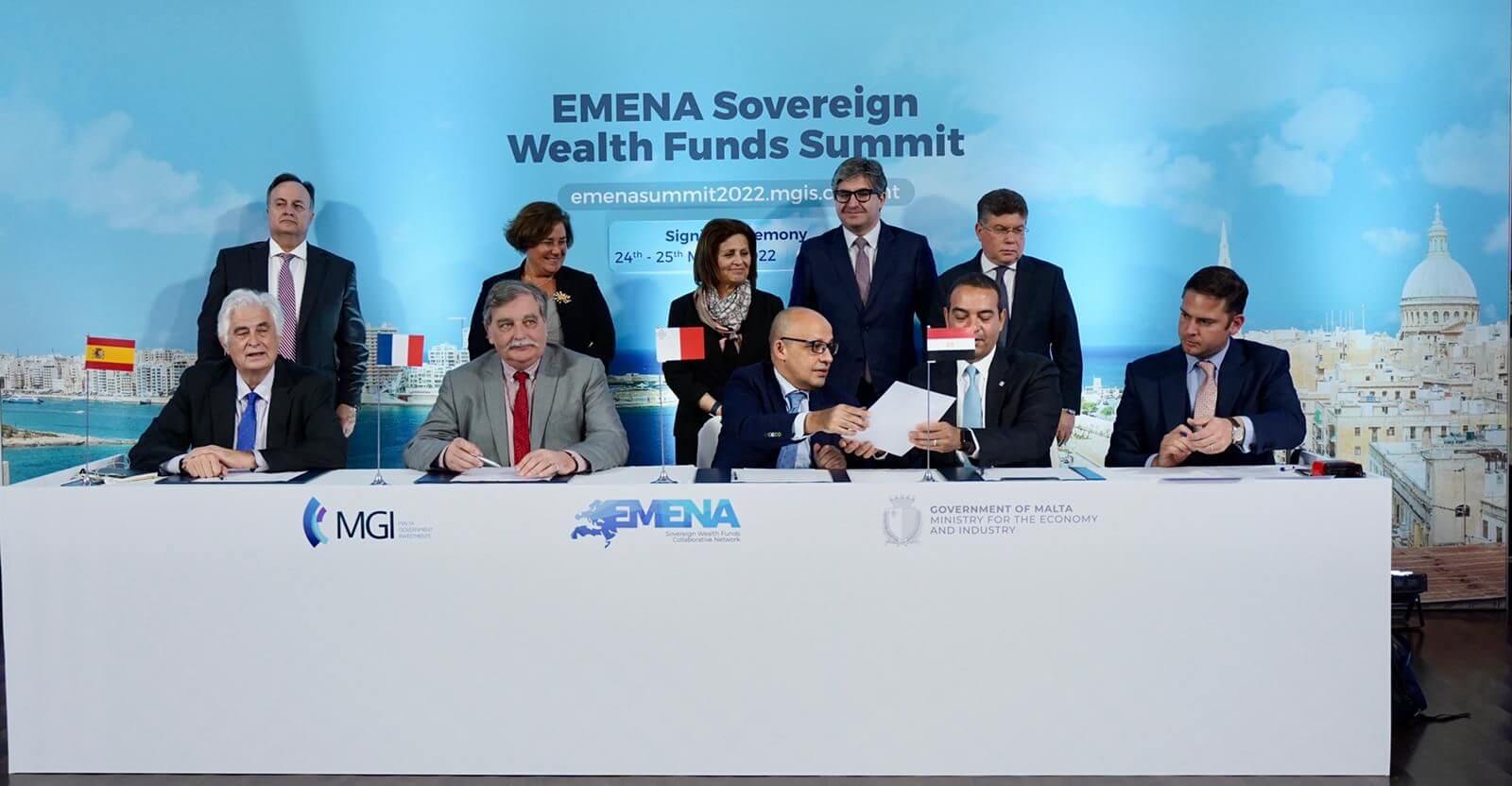 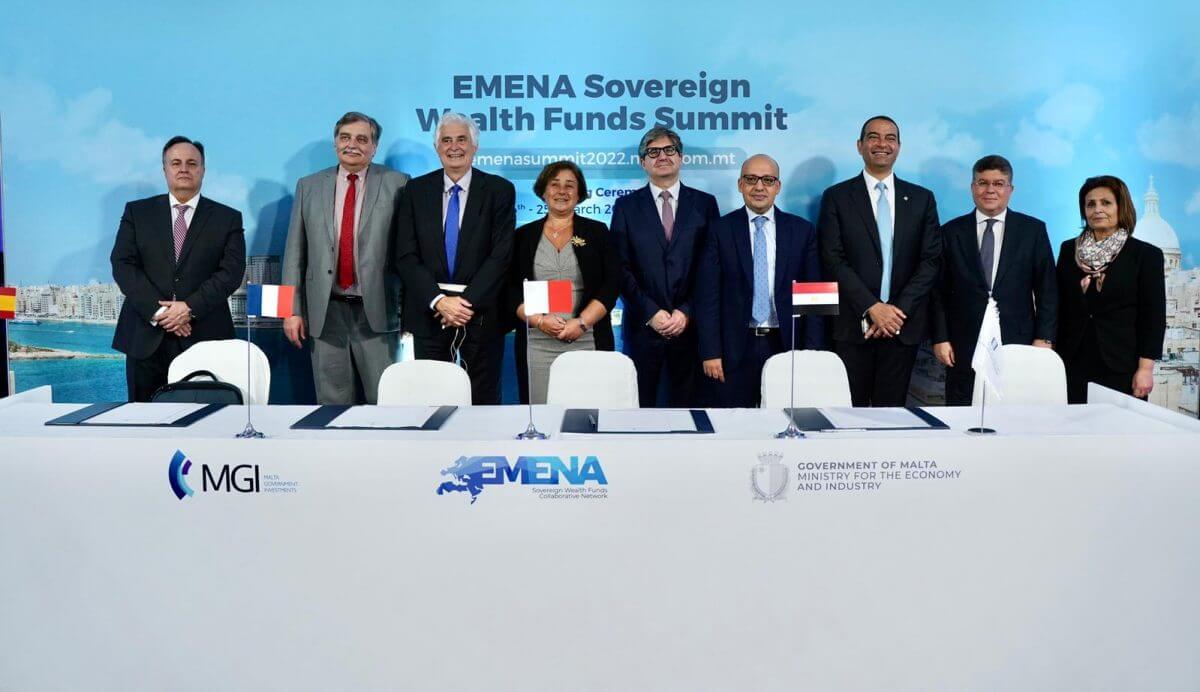 Malta Government Investments (MGI), the Sovereign Fund of Egypt (TSFE) and Bpifrance signed a deed to found the “The European, Middle East and North Africa Sovereign Wealth Funds Foundation” in Malta, laying the basis for a Mediterranean collaboration network. In addition, the Compañía Española de Financiación del Desarrollo (COFIDES) signed a memorandum of understanding with the three parties with the intention to become a member of EMENA.

The foundation aims to serve as a regional platform for members to meet and exchange experiences and available information on investment opportunities to achieve national and sustainable economic development goals in Europe, the Middle East and North Africa. The collaboration network further aims to crowd in sovereign fund backed capital that will help unlock significant private investment flows to de-risk and fund projects or companies in the EMENA area that has an investment funding gap of USD700-900 billion, with a special focus on green technology, sustainable development, SMEs and innovation.

The signing which took place on 24th March 2022 was witnessed by the Permanent Secretary of the Ministry for Economy and Industry (Malta), the Ambassadors for Egypt, France, Spain, and the Chairman of MGI. CEOs, Managing Directors and high level delegations from Ithmar Capital (Morocco), Kuwait Investment Authority, Cassa Depositi e Prestiti (Italy), Standard Chartered and Boston Consulting Group (BCG) attended the signing as well. Senior officials from the European Investment Bank and the Oman Investment Authority also participated in a two day summit that was held in Malta between 24 to 25th March 2022.

“Malta Government Investments is very proud to have led in the past two years the setting up of the EMENA (Europe Middle East North Africa) Sovereign Wealth Funds Collaborative Network together with Bpifrance and The Sovereign Fund of Egypt. The EMENA SWF Foundation, based in Malta, is a network of sovereign funds in the region that will discuss and share co-investment opportunities.”, said Herald Bonnici, CEO of MGI.

“TSFE’s collaboration with MGI, Bpifrance and COFIDES in establishing the EMENA SWF Foundation emphasizes the fund’s commitment to unlocking the investment potential in Egypt by creating long-term investment partnerships with investors and sovereign wealth funds in the region. TSFE’s leading role in developing flagship projects in Egypt that are economically and environmentally sustainable sets the basis for cooperation and knowledge sharing with members of the foundation, opening new investment opportunities, and fulfilling developmental goals in the region. It is indeed another step towards reaching our 2030 goals “Egypt Vision 2030”, said Ayman Soliman, CEO of The Sovereign Fund of Egypt.

“This agreement marks the beginning of a new cooperation between institutions in the EMENA region, the idea of which emerged on the occasion of the 2019 Med 7 Summit in Malta, where the concept of a platform for regional cooperation was discussed between French President and Maltese Prime Minister. For Bpifrance, the EMENA SWF Collaborative Network is an opportunity to strengthen its action in the Mediterranean region, favour the economic development of its neighbouring countries and generate business opportunities for French companies in the area”, said Pascal Lagarde, Executive Director of Bpifrance.

“We welcome this partnership among sovereign wealth funds focused on the EMENA region. With this new initiative, COFIDES reinforces its participation in organizations led by sovereign wealth funds, currently key financial players thanks to its stabilizing role through medium and long-term investment strategies. COFIDES is also an active member of the International Forum of Sovereign Wealth Funds (IFSWF) and the One Planet Sovereign Wealth Funds network”, said José Luis Curbelo, Chairman of COFIDES.

Malta Government Investments Limited (MGI) is a limited liability company owned by the Government of Malta with a mandate to contribute to the development of government-owned companies by holding equity in undertakings and seeking profitable ventures.  The Company’s mission is to create value for current and future generations. MGI aims to become a pivot point in the economic development in the Maltese islands and to broaden its role in the regional and international dimension by serving as a gateway for the development and promotion of multinational initiatives.  Its mission is to build relationships and networks to create and participate in synergies with private and public stakeholders to further the economic growth and prosperity in the country.
Website https://mgis.com.mt/

About The Sovereign Fund of Egypt (TSFE):

The Sovereign Fund of Egypt (TSFE) was established in 2018 to attract private investments to Egypt and promote and co-invest in state-owned assets to maximize their value and efficiency for future generations in partnership with the domestic and international private sector. It operates through unique legislation that allows it to operate with a private-sector mindset and according to private-sector laws and regulations. Its goals include investing in transactions that create jobs and increase the private sector’s contribution in the Egyptian economy. TSFE operates in accordance with global best practices in investment and ESG. The fund is overseen by an independent board of directors and general assembly. TSFE is a member of the International Forum of Sovereign wealth Funds (IFSWF) and One Planet Sovereign Wealth Funds (OPSWF).

COFIDES, a state-owned company engaging in the management of State and third-parties funds, pursues the following objectives: internationalisation of Spain’s economy, furtherance of economic development and solvency reinforcement of companies impacted by COVID-19. In addition to the Spanish State, its shareholders include Banco Santander, Banco Bilbao Vizcaya Argentaria (BBVA), Banco Sabadell and Development Bank of Latin America (CAF).
Website www.cofides.es