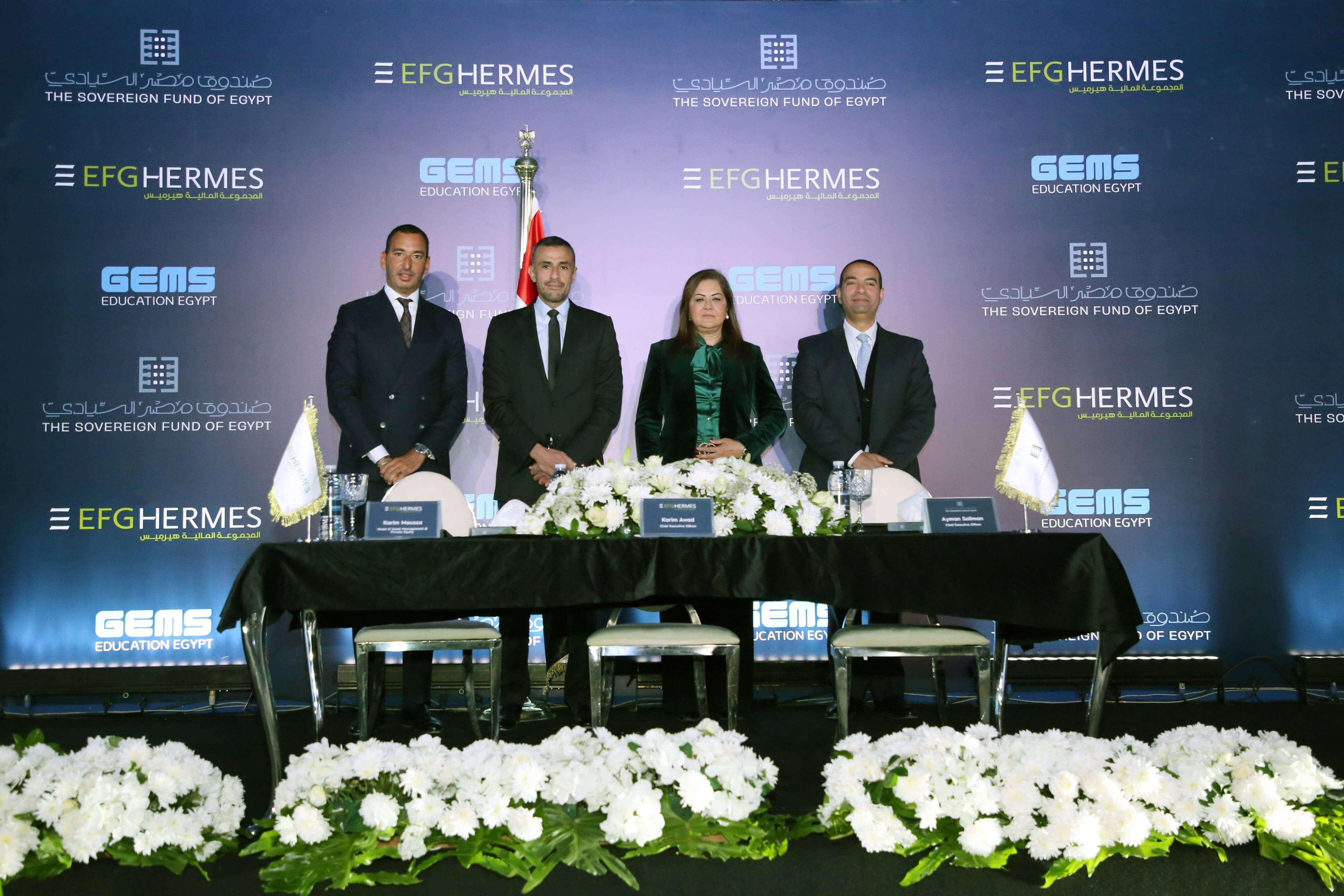 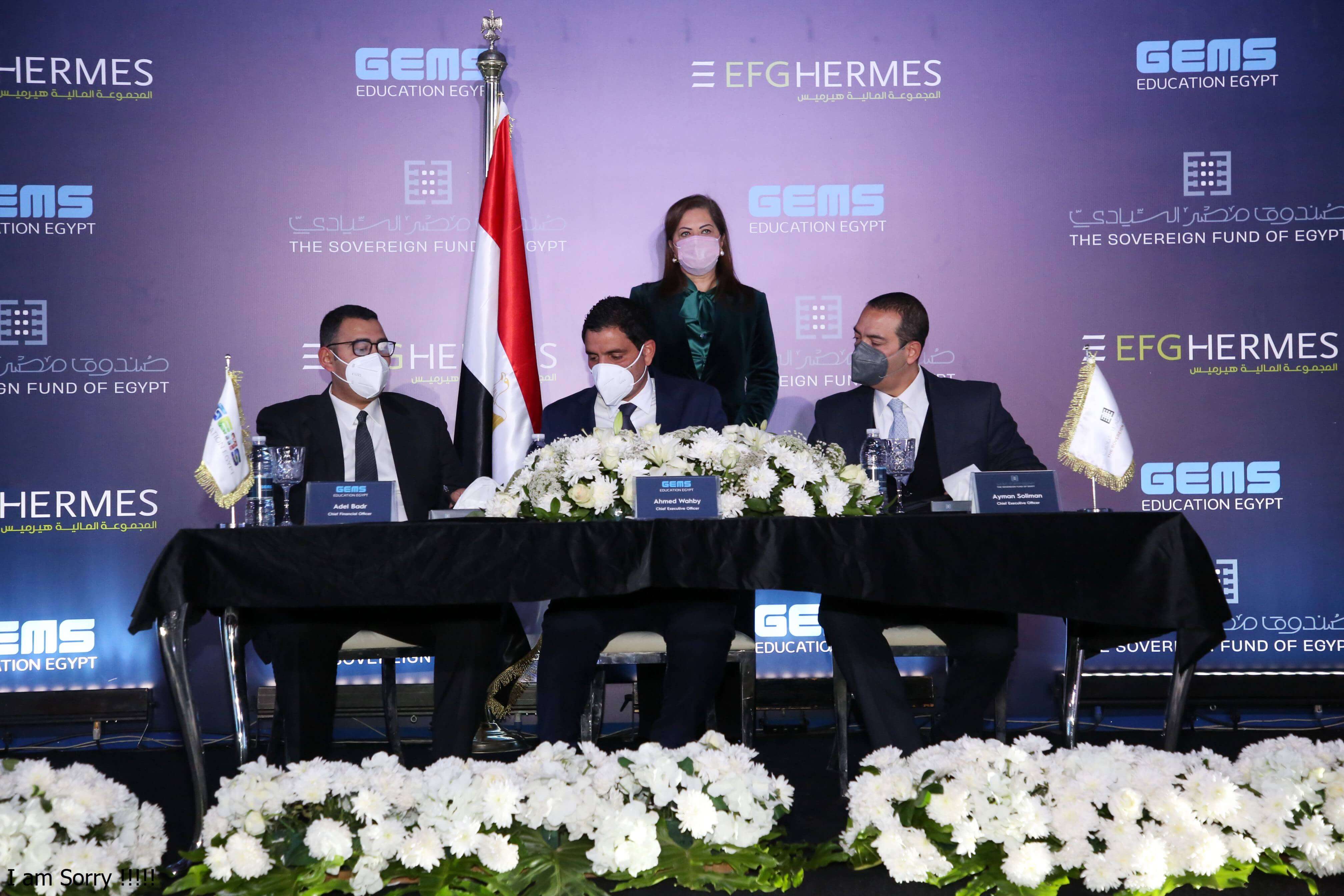 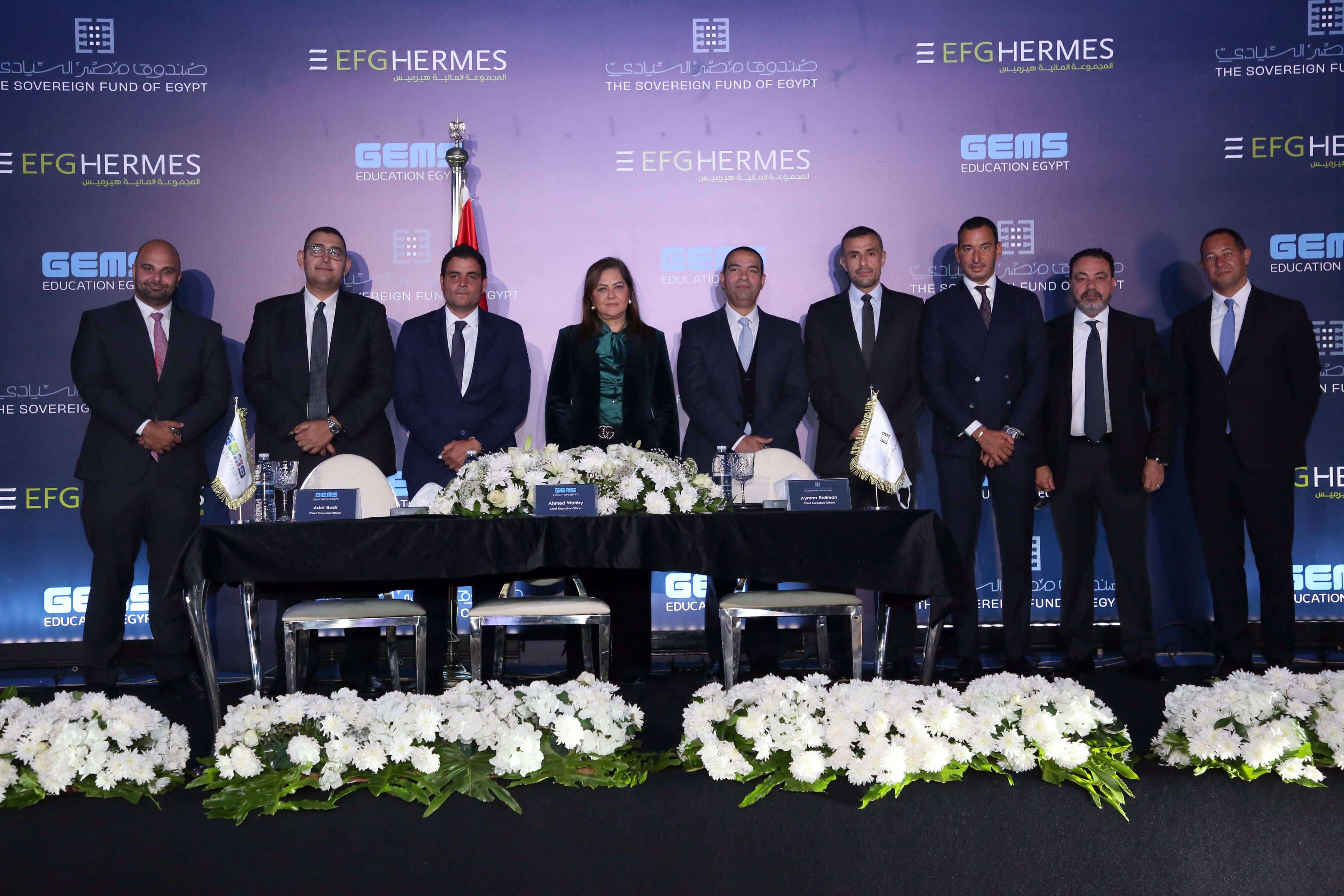 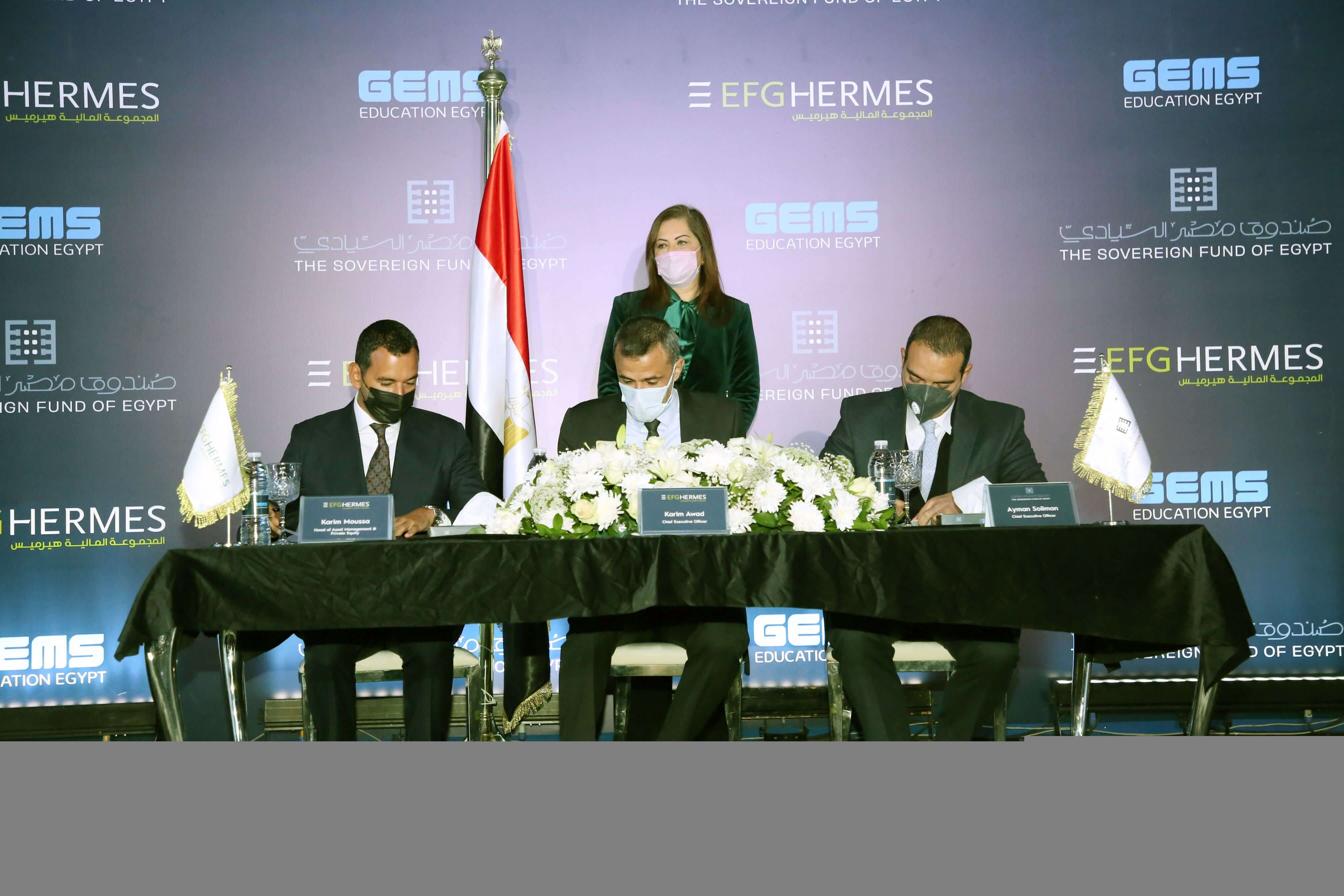 TSFE and GEMS Egypt also signed a memorandum of understanding to develop and operate two premium national schools West of Cairo, which will be built over 30,000 sqm with a capacity of 2,500 students each. The schools will be constructed on TSFE-owned land in line with its mandate to create value out of previously unutilized assets.

The investment is considered TSFE’s first in Egypt’s education sector and is a testament to GEMS Egypt’s success in the local market over the last two years which saw the platform deploy investments amounting to almost EGP 1.6 billion.

“These investments made by TSFE in the education sector serve to underscore the state’s strategic priorities, which are aligned with its political leadership’s vision to achieve the overarching sustainable development principles and goals outlined in Egypt’s Vision 2030,” said Minister of Planning & Economic Development and Chairperson of TSFE Dr. Hala El Said. “TSFE seeks to increase returns and create wealth for future generations across several axes, among which is creating sustainable returns from its existing and potential assets through investments in projects that tie closely to Egypt’s priorities. This also falls in line with investing in human capital, which is considered a fundamental element of the comprehensive development process. Egypt’s Vision 2030 emphasizes education as central to the development of future generations, especially through the use of technology, which has become vital to the future of all economies. TSFE’s focus on these investments will result in meeting multiple objectives represented in utilizing idle assets and creating educational capacities while generating sustainable returns on investment.”

“The resilient yet growing education sector in Egypt continues to provide attractive opportunities for local and global players,” said CEO of TSFE Ayman Soliman. “The distinguished partnership between TSFE, EFG Hermes, and GEMS Egypt will set a benchmark in the sector as it will present our distinct national curricula through a school model that also focuses on development, sports, interpersonal skills, and technological integration, encompassing a plan for a modern curriculum that aligns with Egypt’s future vision for education. Part of TSFE’s current and potential assets will be used to provide a wide segment of Egyptians with high quality education that is benchmarked against international standards at affordable tuition. This is intended to support the middle class against challenges that include waiting lists for school entry and the burdens of private lessons. This partnership will also be followed by similar alliances with entities that possess technical know-how and the necessary capital in the near future.”

“EFG Hermes has committed itself to establishing the largest education investment fund in Egypt,” said Group CEO of EFG Hermes Karim Awad. “This partnership with TSFE confirms the dedication of the Firm to invest in the education sector —the main pillar and growth driver of the country’s economic development. We aspire to further fortify this agreement through continuous collaborations and the concerted efforts of various entities across the Egyptian educational sector, as we seek to guarantee the right to quality education for all Egyptians and upgrade the competitive capabilities of the Egyptian education system in line with Vision 2030.”

“We are honored to be partnering with TSFE and recognize the valuable addition it brings to the EFG Hermes Education Fund. Our visions and goals are in direct alignment when it comes to unlocking potential and driving value in the Egyptian education sector by developing a strong institutional presence capable of offering educational services that follow the highest global standards,” said Head of Assets Management & Private Equity at EFG Hermes Karim Moussa. “This is the third close of our education fund, which now ranks as one of the largest specialized investment funds in the MENA region. Our fund’s capital currently amounts to c.USD 150 million, which perfectly positions us to continue expanding our scope in the Egyptian market.”

“We have been working to develop a full-fledged platform that offers world-class education services across our offering, be that in national or international schools,” said GEMS Egypt CEO Ahmed Wahby. “Our partnership with TSFE will allow us to effectively utilize GEMS Egypt’s unique capabilities which include distinguished teacher training academies, modern international curricula, international educational benchmarks, and advanced information technology infrastructure to offer students a balance between a strong national curriculum and the most advanced international learning techniques. We believe our comprehensive management service model will help expand our geographical presence in the local market while maximizing value for landowners like TSFE through long-term impactful investments.”

About The Sovereign Fund of Egypt (TSFE)

The Sovereign Fund of Egypt (TSFE) was established in 2018 to attract private investments to Egypt and promote and co-invest in state-owned assets to maximize their value and efficiency for the Egyptian economy. Its goal is to maximize the value of sate-owned assets and to manage them in a manner that prioritizes returns for the state and for future generations of Egyptians — all in partnership with the domestic and international private sector. It operates through unique legislation that allows it to operate with a private-sector mindset and according to private-sector laws and regulations. Its goals include investing in transactions that create jobs and give incentives to the private sector to participate in the Egyptian economy. TSFE operates in accordance with globally accepted best practices in all respects, from its clear and disciplined investment focus to its governance. The fund is overseen by a board of directors as well as a general assembly. TSFE is an associate member of the International Forum of Sovereign wealth Funds (IFSWF).

With a current footprint spanning thirteen countries across four continents, EFG Hermes started in Egypt and has grown over 35 years of success to become a leading financial services corporation with access to emerging and frontier markets. Drawing on our proven track record and a team of more than 5,500 talented employees, we provide a wide spectrum of financial services that include investment banking, asset management, securities brokerage, research, and private equity to the entire MENA region.

In 2015, EFG Hermes launched its NBFI Platform, EFG Hermes Finance, which overlooks activities in the non-banking finance field through EFG Hermes Corp-Solutions, which offers leasing and factoring facilities, Tanmeyah Microfinance, consumer financing platform valU, PayTabs Egypt in the payment solutions space, Bedaya, which offers mortgage solutions, and an insurance business. This falls in line with the Firm’s strategy to focus on two main pillars: product diversification and geographic expansion into non-MENA markets, which has seen the firm establish a physical presence in Pakistan, Kenya, Bangladesh, Nigeria, Vietnam, the United Kingdom and the United States.

GEMS Egypt was established in 2018 as a partnership between the EFG Hermes Education Fund and GEMS Education, one of the largest private school operators in the world. The partnership aimed at establishing a pioneering institutional entity that can follow world-class operating standards and stand out as a leader in the Egyptian education sector. Its current portfolio includes language schools and international schools that provide distinctive educational services to about 7,000 students through the efforts of over 1,200 teachers and administrators.