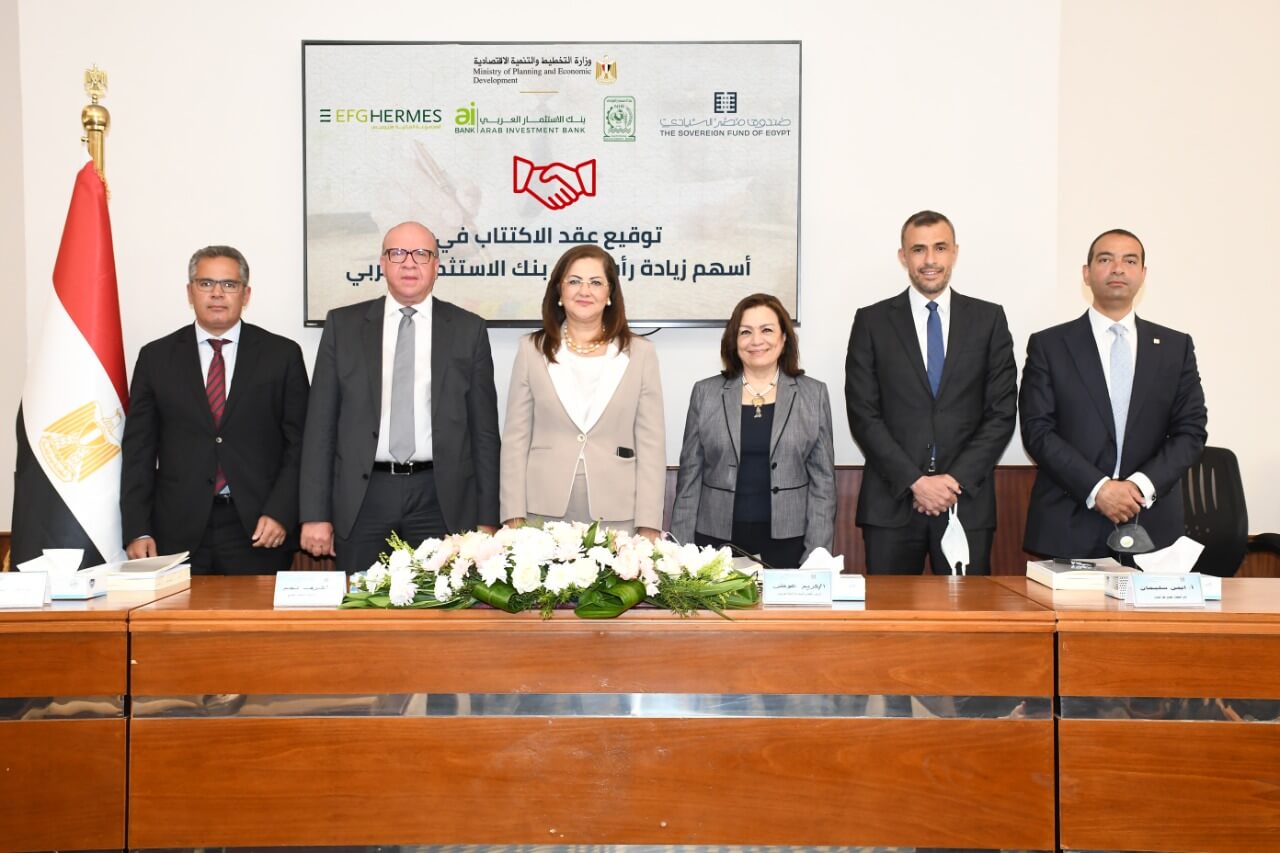 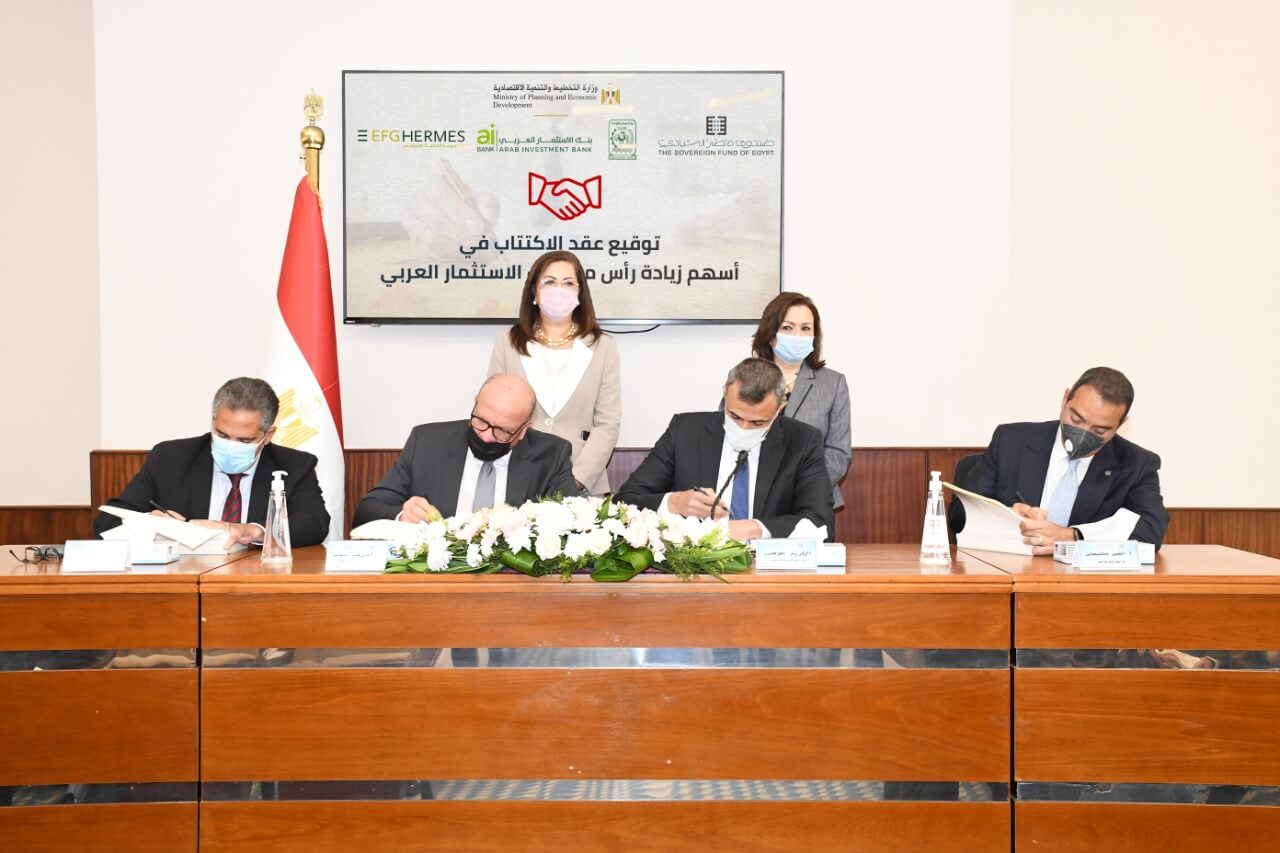 The Sovereign Fund of Egypt (TSFE) and EFG Hermes Holding S.A.E (EFG Hermes, HRHO on the Egyptian Exchange) are pleased to announce that they have executed agreements to acquire 76% of the capital of Arab Investment Bank (AIB or the Bank). The acquisition will be structured as a capital increase that will increase the paid-in capital of the Bank to EGP 5 billion, making it compliant with the regulatory requirements of the Egyptian Banking Law.

The transaction received the approval of the Egyptian Cabinet on Wednesday, 19 May, but is still subject to the fulfillment of a number of conditions precedent, including the final approval of the Central Bank of Egypt.

H.E added that engaging in similar transactions showcases the intrinsic integration between the visions and objectives of different state bodies, with TSFE anchoring and arranging a private-sector partnership to restructure and generate returns on a state-owned asset. “By retaining a stake in AIB, the National Investment Bank is slated to benefit from the promising returns AIB will generate following the ambitious restructuring plan drawn up in partnership with the private sector.

“AIB’s financial indicators will witness a substantial improvement, as will its competitiveness within the market. It will be better poised to comply with the Central Bank of Egypt’s regulatory requirements, drawing on the technical expertise available in TSFE and EFG Hermes, AIB’s new partners.

“The transaction’s success is a result of the cooperation protocols TSFE signed with different state bodies including the National Investment Bank, benefitting from its large portfolio. It reflects the close collaboration between different state bodies, in coordination with the Cabinet, working towards attracting private investments to government projects”, H.E concluded.

Mona Zulficar, the Chairperson of EFG Hermes Holding, added: “The signing of this landmark transaction has helped create a partnership between TSFE and EFG Hermes, the leading financial services corporation in frontier emerging markets, as we work together to unlock the potential of the Bank and help it play an increasingly active role in the Egyptian Government’s drive for financial inclusion and digital transformation in the coming years. I am also hopeful that it will set the mold for future cooperation between the Egyptian private sector and TSFE.”

Commenting on the transaction, Ayman Soliman, CEO of TSFE, said: “The partnership with EFG Hermes in AIB aims to capture compelling growth opportunities in the Egyptian banking sector. Driven by the strong commitment of the Egyptian Government towards boosting financial inclusion and digital transformation as a driver to serve wider segments of the society, AIB is now well-positioned to become a significant catalyst of this goal. Furthermore, this partnership embodies TSFE’s mandate of attracting local and international private-sector investors to state-owned assets and maximizing returns for future generations.”

Soliman added: “The banking sector is a key holding in the portfolios of major sovereign funds globally, reflecting the significance of the sector in driving economic growth. AIB’s strategy will focus on serving small and medium enterprises as a driver for inclusion. By upgrading its technological infrastructure, the bank will be better able to serve more customers, especially after the capital increase to meet the new Banking Law requirements.” He also added that AIB’s transaction is the first of many to come from the cooperation protocol TSFE signed with the National Investment Bank in the near future.

Karim Awad, CEO of EFG Hermes, said: “We are thrilled to be partnering with TSFE on one of their first investments. The acquisition of a controlling stake in AIB represents a strategic milestone for the company, transforming us into a universal banking platform that offers its clients a full spectrum of financial services. As a company, we continue to be extremely bullish about what the future holds for Egypt and are proud to be committing a multi-billion pound investment in our home market in a vital sector that holds significant potential for future growth.”

Awad added: “The acquisition of AIB sees EFG Hermes enter the commercial bank space as part of a diversification strategy that has seen the group become the leading all-inclusive universal-access financial corporation with a presence spanning frontier emerging markets. This diversification strategy has seen EFG Hermes consistently create new value for all stakeholders despite headwinds that most recently have included the covid-19 pandemic.”

The parties will begin working on the fulfillment of the conditions precedent immediately, with the transaction expected to close in the third quarter of 2021.

With a current footprint spanning thirteen countries across four continents, EFG Hermes started in Egypt and has grown over 35 years of success to become a leading financial services corporation with access to emerging and frontier markets. Drawing on our proven track record and a team of more than 5,500 talented employees, we provide a wide spectrum of financial services that include investment banking, asset management, securities brokerage, research, and private equity to the entire MENA region.

In 2015, EFG Hermes launched its NBFI Platform, EFG Hermes Finance, which overlooks activities in the non-banking finance field through EFG Hermes Corp-Solutions, which offers leasing and factoring facilities, Tanmeyah Microfinance, consumer financing platform valU, PayTabs Egypt in the payment solutions space, Bedaya, which offers mortgage solutions, and an insurance business. This falls in line with the Firm’s strategy to focus on two main pillars: product diversification and geographic expansion into non-MENA markets, which has seen the firm establish a physical presence in Pakistan, Kenya, Bangladesh, Nigeria, Vietnam[1], the United Kingdom and the United States. www.efghermes.com

About The Sovereign Fund of Egypt (TSFE):

The Sovereign Fund of Egypt (TSFE) was established in 2018 to attract private investments to Egypt and promote and co-invest in state-owned assets to maximize their value and efficiency for future generations in partnership with the domestic and international private sector. It operates through unique legislation that allows it to operate with a private-sector mindset and according to private-sector laws and regulations. Its goals include investing in transactions that create jobs and increase the private sector’s contribution in the Egyptian economy. TSFE operates in accordance with global best practices in investment and ESG. The fund is overseen by an independent board of directors and general assembly. TSFE is a member of the International Forum of Sovereign wealth Funds (IFSWF) and One Planet Sovereign Wealth Funds (OPSWF).