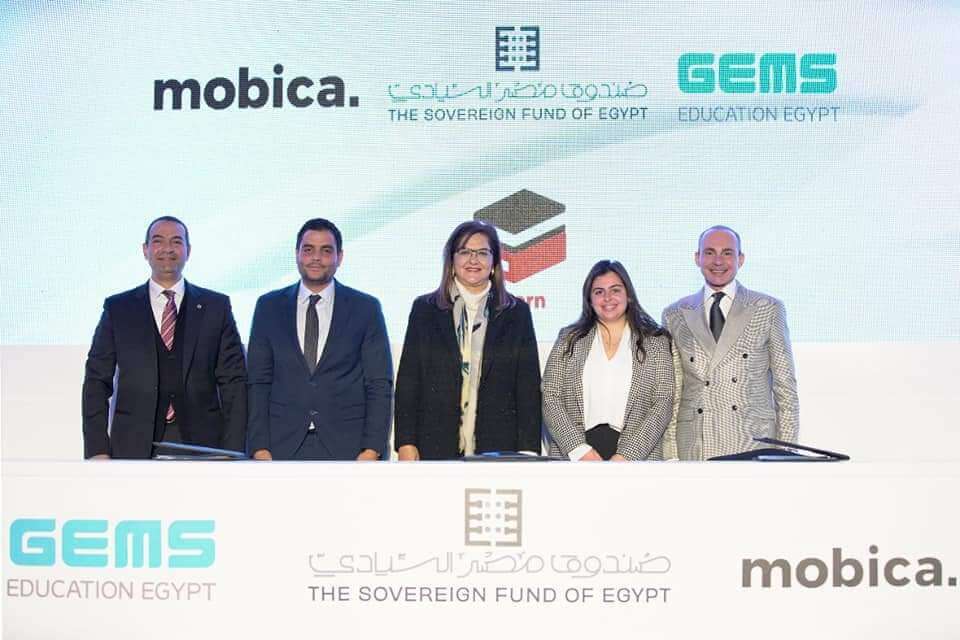 The Sovereign Fund of Egypt in partnership with Mobica and GEMS:

Dr. Hala El-Said, Minister of Planning and Economic Development and Chairperson of The Sovereign Fund of Egypt (TSFE) witnessed laying the foundation stone of two schools in the Cosmic Village in Sixth of October City, in partnership between The Sovereign Fund of Egypt, Mobica & GEMS, serving TSFE’s goals of utilizing its transferred assets and supporting education in addition to achieving a good return on investment. Under this partnership model, TSFE & Mobica will incorporate this new entity, while GEMS will run the schools in return for a management fee. Dr. Hala El Said, Minister of Planning and Economic Development, and Chairperson of TSFE said: “This project is a manifestation of the Egyptian Government determination to generate highest possible returns from its’ unutilized assets. Moreover, investing in education fields related to modern technology is in accordance with the National Structural Reform Program (NSRP) and contributes to improving the skills of the labor force. El Said added: “These schools will provide world-class education, affordable to middle income Egyptian families, while setting the bar through TSFE’s created partnerships with the private sector to maximize returns on unutilized state-owned assets and encourage public-private partnerships.” H.E. concluded: “Investing in affordable, high-quality education is the first step towards achieving sustainable development and equipping Egypt’s human capital with the skills and qualifications needed to excel in today’s world”

Ayman Soliman, TSFE’s CEO said: “TSFE’s strategic plan is to maximize returns on state owned assets by establishing innovative partnerships through its Subfunds. TSFE will utilize the land at the Cosmic Village to build two schools in partnership with a pioneering local investor and to be managed by a global company specialized in education, a model that we aim to replicate across Egypt’s governorates.” “We managed to strike the perfect balance in this partnership represented in an unutilized land plot, an ambitious Egyptian partner coupled with world-class management to achieve investment-grade returns.” Soliman added: “The Egyptian education sector promises competitive and stable returns, making it extremely attractive to domestic and foreign capital. The planned schools will offer Egypt’s National Curriculum while aligning it to the highest international standards, providing Egyptian households with a reprieve from school waiting lists and the burdens of private lessons. The schools will offer high-quality education at moderate prices, targeting a wide segment of the Egyptian population. Additionally, this project will help raise the competitiveness of the Egyptian education sector, pushing existing players to improve the quality and the pricing of services they provide.”

For his part, Mohamed Farouk Abdel Moneim, Chairman and CEO Mobica said: “We’ve partnered with TSFE to establish the Intelligent Learning company (I-Learn), aiming to provide students with the technical skills needed on the international market at an early age. We’re creating a distinct investment model that generates good returns for all parties and reflecting the immense latent potential of the education sector in Egypt.”

Abdel Moneim added: “Mobica has decided to invest in bringing high-quality education to a broad segment of society, as it provides adequate financial returns while satisfying our company’s continued mandate to develop Egypt’s human Capital. We’re creating a platform with an eye to expand throughout the country and advancing the educational system in Egypt through equipping students with skills that are currently in demand in the job market.”

Ahmed Wahby, CEO of GEMS Egypt said: “Egypt’s Education Platform has a strong unwavering commitment to continue to provide the best in educational services and this partnership with both TSFE & Mobica is a manifestation of such commitment. The promise to offer our strong national curriculum in a manner that is relevant to our times is what makes this partnership scalable to other governates.”

About The Sovereign Fund of Egypt (“TSFE”):

The Sovereign Fund of Egypt (TSFE) was established in 2018 to attract private investments to Egypt and promote and co-invest in state-owned assets to maximize their value and efficiency for the Egyptian economy. Its goal is to maximize the value of state-owned assets and to manage them in a manner that prioritizes returns for the state and for future generations of Egyptians — all in partnership with the domestic and international private sector. It operates through unique legislation that allows it to operate with a private-sector mindset and according to private-sector laws and regulations. Its goals include investing in transactions that create jobs and give incentives to the private sector to participate in the Egyptian economy. TSFE operates in accordance with globally accepted best practices in all respects, from its clear and disciplined investment focus to its governance. The fund is overseen by a board of directors as well as a general assembly. TSFE is an associate member of the International Forum of Sovereign Wealth Funds (IFSWF).

Mobica was founded in 1979 with a vision of transforming the office furniture industry in Egypt and has since grown to become one of the furniture industry market leaders in the Middle East. It has recently ventured into developing turn-key projects in cooperation with the public and private sectors.

One of Mobica's goals is to invest in the Egyptian market through projects that help in creating job opportunities and localization of technology as well as creating investment returns for the company. That’s why mobica decided to enter into a project as a major investor and in cooperation with the sovereign fund of Egypt to build two schools in the cosmic village land that will have a social return through offering premium learning contents with affordable prices.

GEMS Egypt was established in 2018 as a joint fund between EFG Hermes’ Egypt Education Fund and GEMS Education, as one of the largest private K-12 providers in the world. The company since then succeeded in making significant contributions to the Egyptian education sector through major investments. GEMS Egypt currently owns a sizable portfolio of private national and international schools offering quality education to over 7,000 students utilizing the experience of more than 1,200 staff.